Is My Horse Getting Too Much Iron in Daily Gold or Redmond Rock?

"Is my horse getting too much iron from Redmond Rock products and/or Daily Gold?" It's an important question and one we hear often from customers. Iron overload is mentioned frequently in the equine world when discussing  supplements, feed, and trace minerals for horses, and can cause concern for horse owners.

We want you to feel informed, comfortable, and confident feeding Redmond mineral products to your horse. So let's talk about iron, how much horses need, and why you shouldn't be worried about the amounts in Redmond Rock,  Redmond Rock Crushed loose minerals, or Daily Gold Stress Relief. 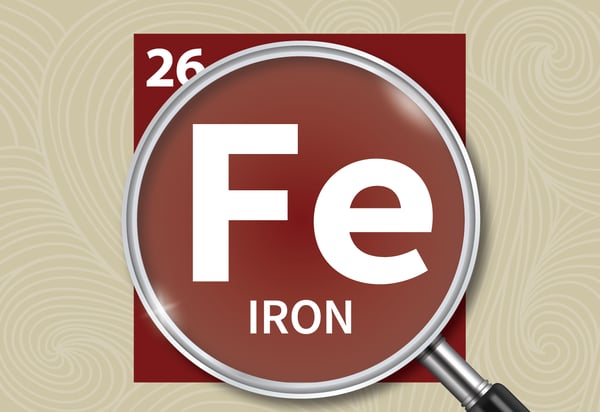 Importance of Iron and Other Trace Minerals for Horses

According to the Minerals Education Coalition, iron is the fourth most abundant element in Earth’s crust. Iron is essential for horses to make hemoglobin, a protein in red blood cells that carries oxygen from the lungs to muscles and tissues throughout their bodies. Iron also produces myoglobin, a protein in the muscle cells that stores and delivers oxygen. Without iron, horses will become anemic.

How Much Iron Do Horses Need?

According to the National Research Council (NRC), a mature horse should get 40 to 50 ppm (parts per million) of iron. What does that mean in terms of feed?

The NRC recommends horses eat 2% of their body weight per day in forage. That means an average 1,300-pound horse should eat around 12 kilograms (26 pounds) of feed per day. So doing the calculation, an average-sized horse's iron requirement is approximately 600 milligrams per day, with the range extending from 500 to 1,200 milligrams.

This kind of variation in the literature is normal. Committee researchers at the NRC are from universities across the United States and review piles of data to establish the values they suggest. Notice that word, suggest. The NRC makes suggestions or recommendations rather than mandates because of the variation of results in studies from which they draw.

We can safely conclude that horses naturally consume high quantities of iron in feed, and an overload usually occurs when we stray from normal and natural horse nutrition.

How Much Iron is in Redmond Rock and Daily Gold?

Because Redmond Rock has a red hue, some assume it has high iron content. Stated values on the label may add to this perception. Perhaps you’ve seen labeling that states there's 300 ppm of iron in Redmond ROck Crushed. That might cause worry that's more than your horse should be getting. Let's clear up the confusion.

Redmond salt has iron levels of 300 ppm (mg/kg). So there are 300 milligrams  of iron for every kilogram of salt consumed.  But unlike eating 12 kilograms (26 pounds) of forage as mentioned above, horses are only consuming 2 ounces of  Redmond Rock Crushed.  So how much iron is really in Redmond mineral products? 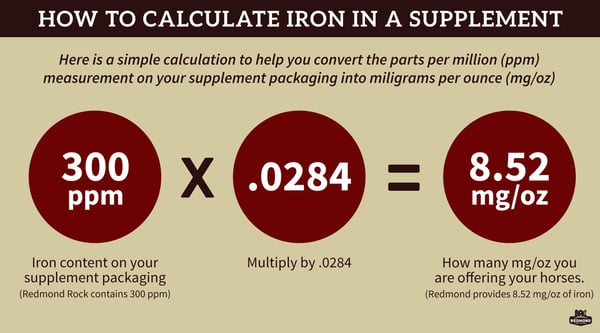 A one- to two-ounce serving of Redmond Rock, Rock on a Rope, or Redmond Rock Crushed salt provides around 300-600 ppm of iron. Doing the calculations in the graphic above, that's 8.52- 17.04 milligrams, which is far below the 500-milligram daily minimum a horse needs.  Find the complete Redmond Rock mineral analysis here.

Of the suggested 500-to-1,200 daily milligrams recommended by the NRC, a 2-ounce serving of Daily Gold bentonite clay provides around 3,900 ppm, or 110.76 milligrams of iron per day. Find the complete Daily Gold mineral analysis here.

When you consider the abundant quantity of iron horses receive from recommended forage rations, the amounts in Redmond Rock and Daily Gold are very small. To put it in context, the iron content in Redmond Rock products is less than 3% of the suggested allowance and not even 1% of actual iron intake.

Mineral requirements are not an exact science, and the mineral interaction web is extremely complex. For example, research suggests iron maintains a close relationship with zinc, copper, and manganese. It's likely iron levels alone don't usually cause problems for horses as much as an imbalance of a group of minerals. In short, iron needs to be balanced with other minerals to maintain good health.

Our Redmond mineral products are mined straight from an ancient Jurassic Era deposit and contain over 60 naturally balanced trace minerals for horses. Both Redmond Rock products and Daily Gold are 100% pure and unrefined and come to customers in the same mineral formula which nature created. Rest assured the minerals, including iron, in Redmond products work in harmony to nourish your horse the way nature intended. 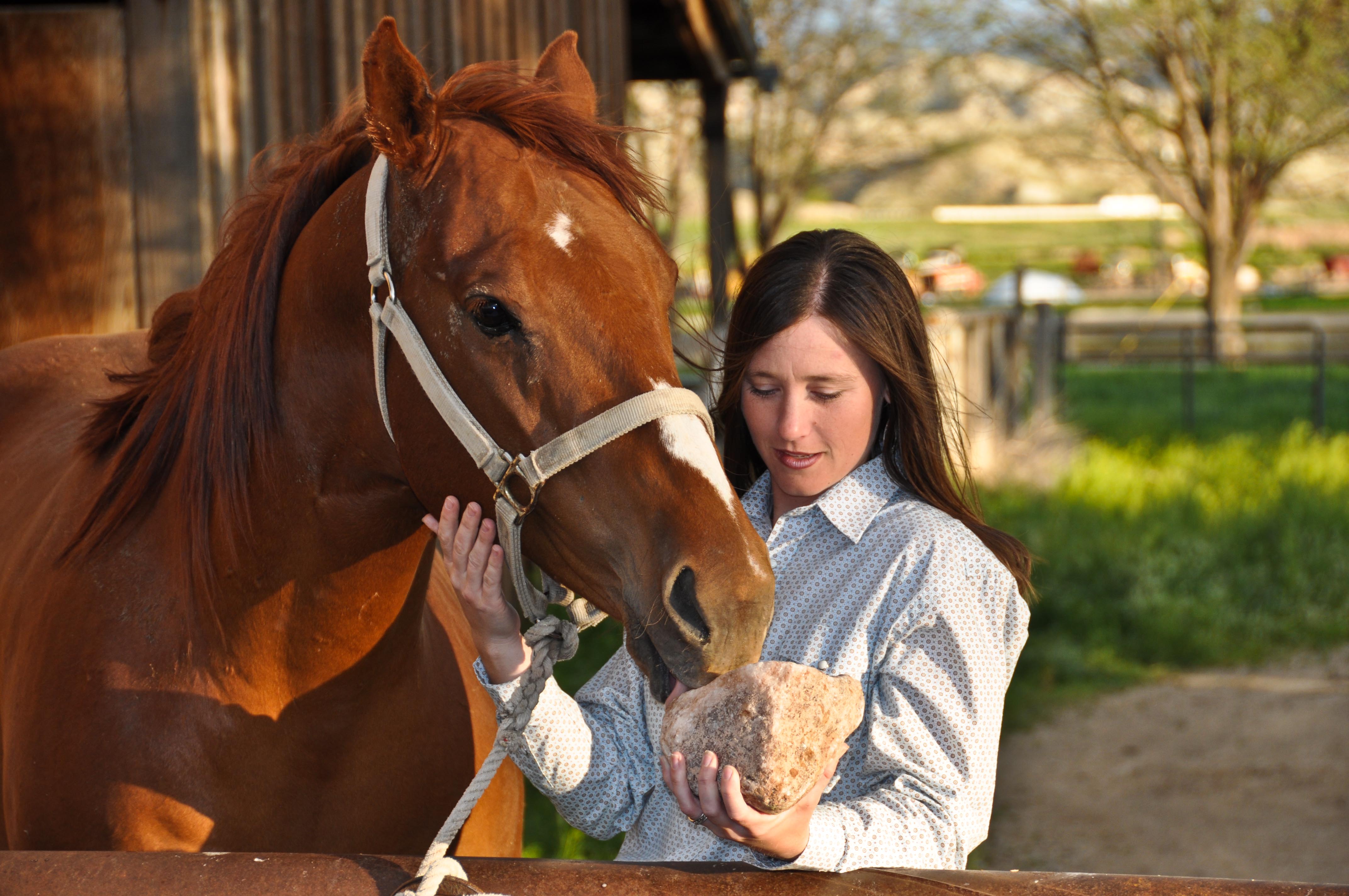 Iron for Horses:  How Much is Too Much?
0 Comments 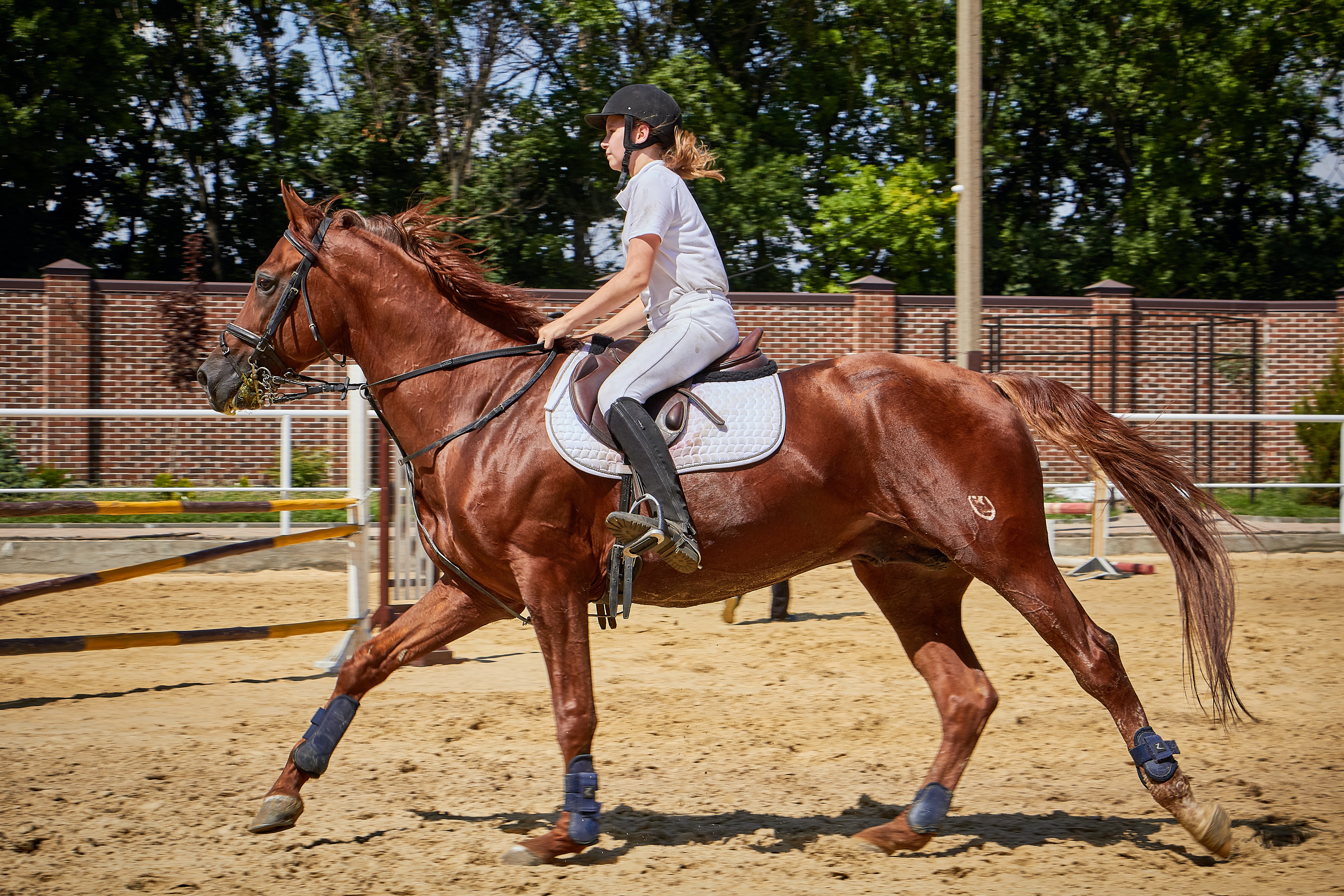 A Redmond Story:  How Kate Got Her Stressed Horse to Calm Down and Focus
0 Comments

A Redmond Story:  How Kate Got Her Stressed Horse... 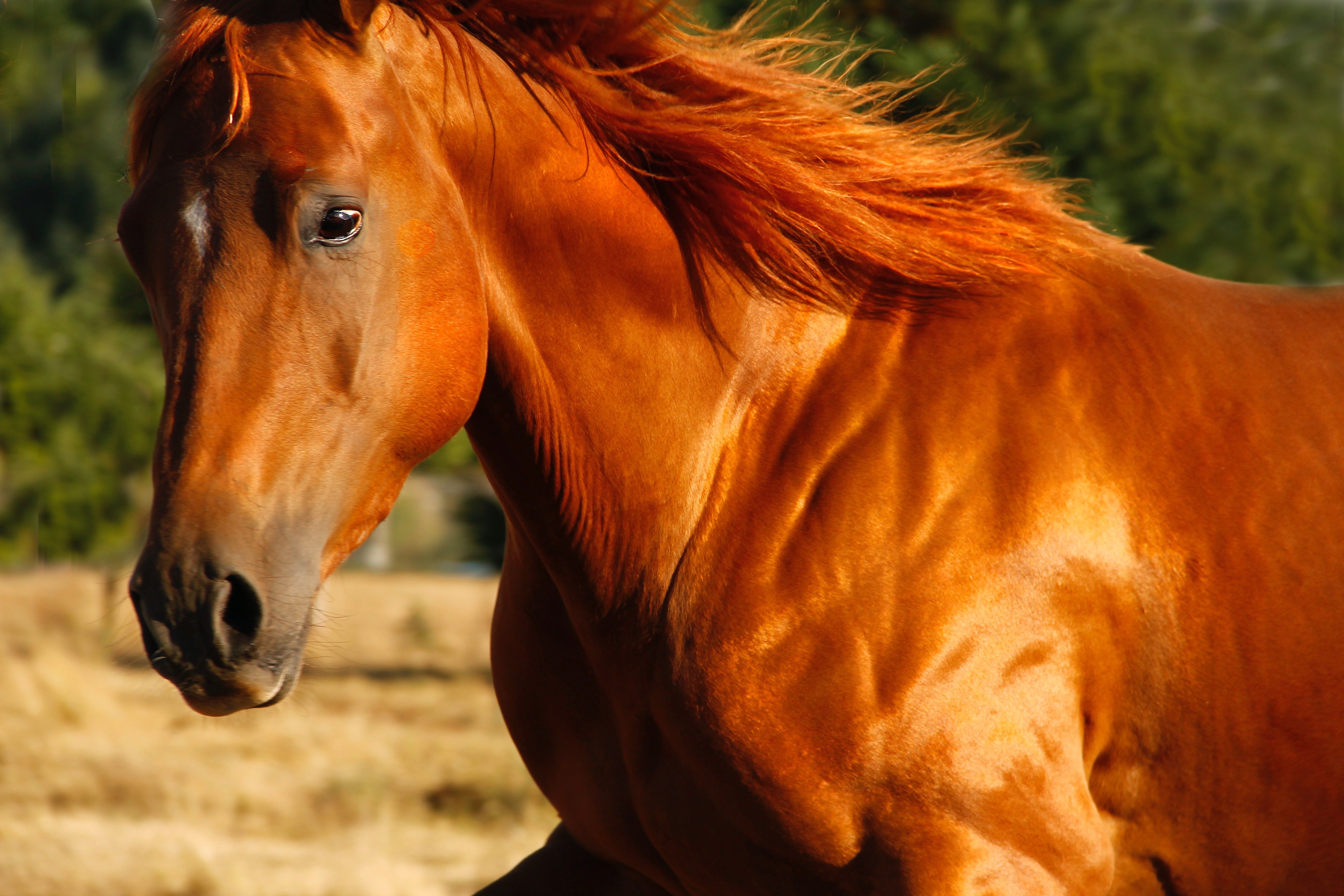 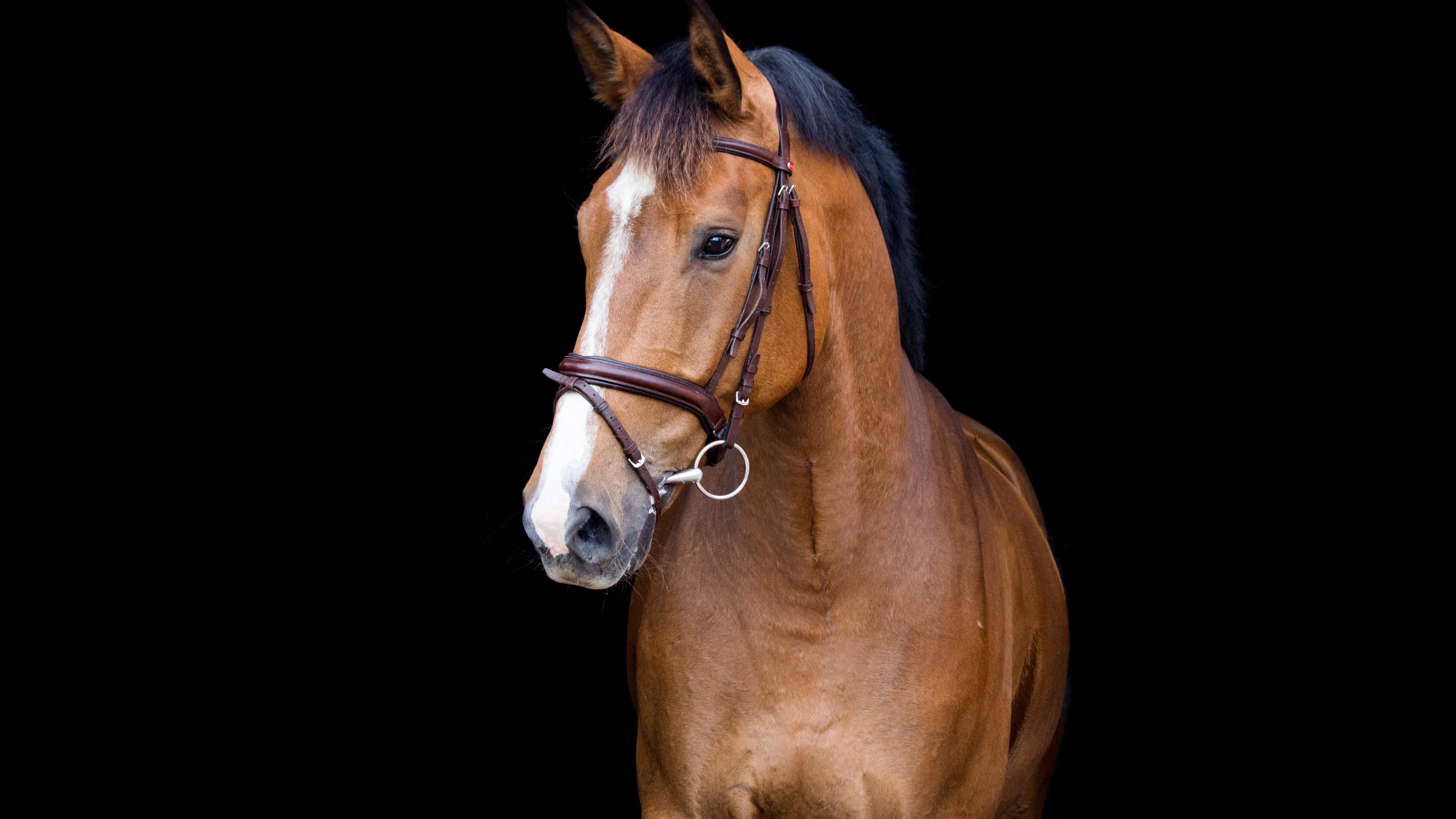 A Redmond Story:  How Jamie Settled Her Stressed...

A Redmond Story:  How Kelly's Senior Horse Regained an Appetite for Life
0 Comments 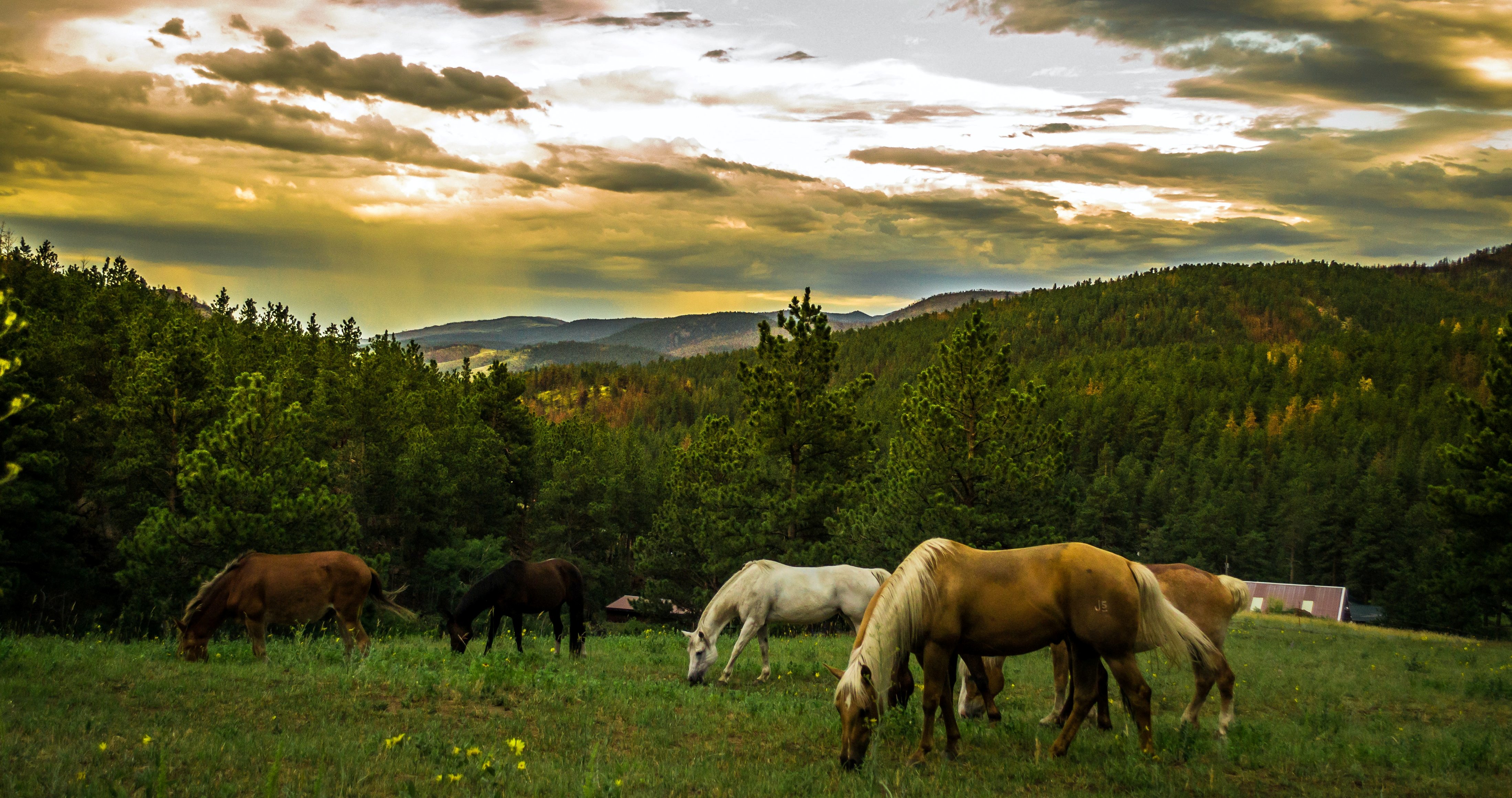 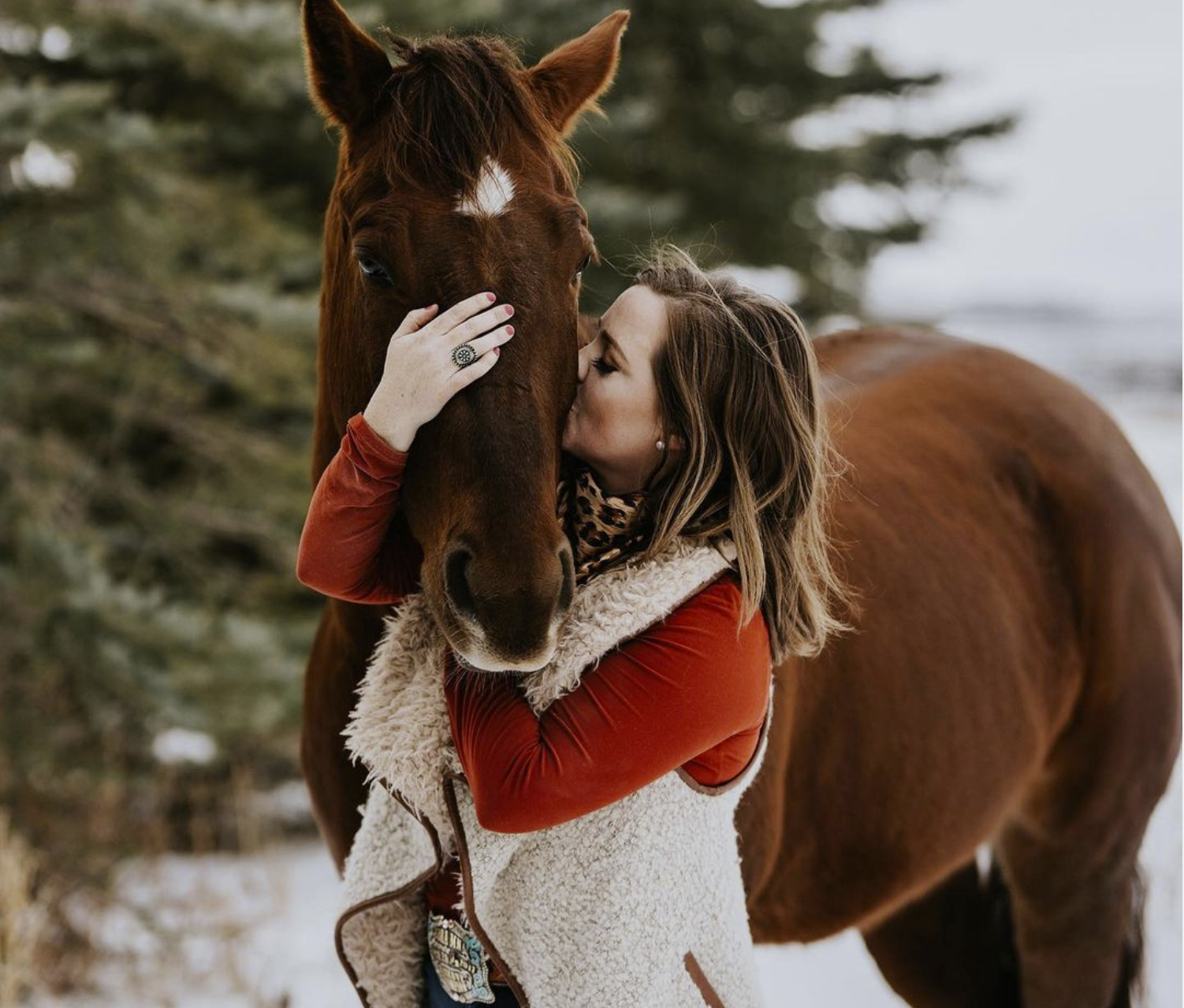